Most people don’t know they talk in their sleep. It’s not until they get an elbow or a snicker from their bedmate that they get clued in on this nighttime behavior.

Sleep talking usually doesn’t make sense. The thoughts do not emerge from a person’s rational mind and are not a reflection of what a person thinks or believes. Sleep talking might be a little embarrassing, but it usually isn’t anything to worry about.

But why do people talk in their sleep? Let’s review some common causes of sleep talking and what can be done to address it.

What Is Sleep Talking?

Talking in your sleep doesn’t put you in danger of telling your deepest darkest secrets. Most sleep talking takes the form of short phrases, moans, or mumbling. These jumbled statements are usually snippets of memories from the past or even thoughts about the future or people we know.

Sleep vocalizations are sometimes accompanied by quick movements of the body. A sleep talker might quickly sit upright, then lie back down as if nothing happened.

It’s unlikely that a person who sleep talks has noticed any symptoms. Only a person in the room with the sleep talker is able to hear what is happening while the person sleeps.

When Does Sleep Talking Happen? 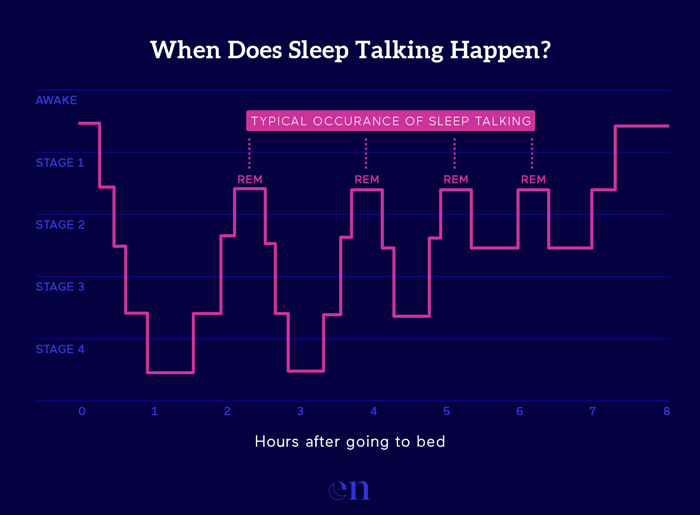 It’s possible to dream at any point while you are sleeping, but the majority of people dream most vividly during rapid eye movement or REM sleep. During this stage, the brain purposely paralyzes the body.

Sleep scientists believe this happens so we can’t act out our dreams. It’s during this time that a small part of the brain might be left lingering awake. This is when disturbances like sleepwalking and talking take place.

Is Sleep Talking a Sleep Disorder?

Somniloquy can be normal and benign, but sometimes it can be a sign of a type of sleep disorder called arousal disorder. These disorders include sleepwalking, night terrors, and nocturnal sleep-related eating disorder.

Sleep talking isn’t considered an arousal disorder because the talking episodes are brief. If the episodes are long and involve moving the body or opening the eyes, they could be caused by a sleep disorder. In these cases, it is time to have a  sleep specialist evaluate you for a more serious disorder.

Who’s at Risk for Sleep Talking?

People under the age of 25 are most at risk for sleep talking. Usually, sleep talking is benign. Sometimes, it may be a side effect of a medical condition.

Another sleep disorder that may be confused for sleep talking is called rapid eye movement sleep behavior disorder (RBD). When a person acts out their dreams, this is an indication of RBD. This disorder is often linked to Parkinson’s disease and other neurodegenerative diseases.

Signs of RBD include flailing limbs and talking or shouting while sleeping. A person with RBD will have vivid recall of the dream even after waking from it. RBD is more common in men over the age of 50 than in any other group. Because RBD is a sign of a serious health condition, if you move while you sleep talk, you should be evaluated by a sleep specialist.

If a sleep talker groans loudly when exhaling while asleep, it can be a sign of a sleep-related breathing disorder called catathrenia. Catathrenia can be treated with continuous positive airway pressure (CPAP) used at night.

Is Sleep Talking a Neurological Disorder?

It’s not impossible for a person to experience a seizure while sleeping. A seizure during sleep is called a nocturnal seizure. It’s important to note if you have any risk factors, signs, or symptoms of a seizure disorder. If so, your sleep talking should be investigated by a healthcare professional.

Why Do People Talk in Their Sleep? 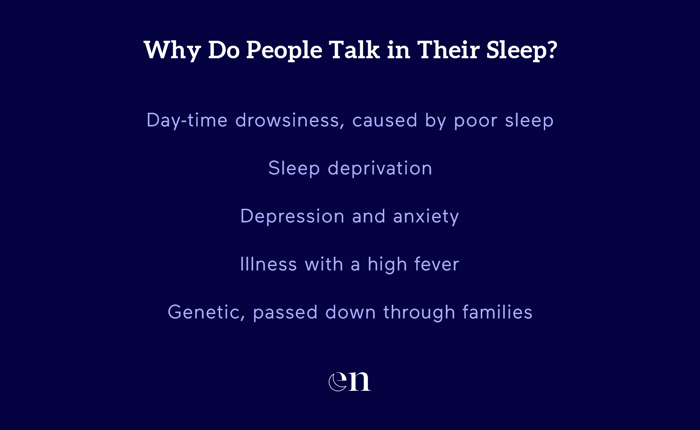 There are many cases where sleep talking is not a sign of a sleep disorder:

Other Things to Consider

How do you treat sleep talking?

In most cases, sleep talking is not accompanied by a sleep disorder. When this is the case, it will usually wane as a child becomes an adult and disappear over time.

Sleep hygiene often solves sleep problems attributed to sleep talking. If you are overtired from sleep deprivation, the following night’s sleep might not be as restful as it could be, which can lead to sleep talking. Identifying triggers can be a useful tool for promoting sleep hygiene. Keeping a sleep diary including incidents of sleep talking can help you do this.

Creating a safe space for sleep includes leaving emotional stress outside the bedroom. For most people, this means making the room as comfortable as possible. This might look like a bed with soft sheets and pillows.

Can you prevent sleep talking?

Sleep specialists have yet to find a way to cease sleep talking completely. Sleep science is growing every day, and we may know more about the roots of sleep talking in the not too distant future. For now, improving sleep quality and avoiding unnecessary stress is the best tool for a better, more restful night.

In the meantime, focusing on sleep hygiene and reducing stress can help you get a better night’s rest and reduce the likelihood of sleep talking.

In most cases, sleep talking is harmless. However, if sleep talking is constant, it may be a sign of a more serious issue, such as stress and anxiety. Those experiencing a night terror may also talk in their sleep, in which case, the talking is a product of the stress experienced in the dream.

Sleep talking is physically harmless, but it can cause sleep disruptions for both you and your spouse. If sleep talking is constant, it may be due to an underlining issue, such as stress. Practicing good sleep hygiene and lower stress levels may help reduce symptoms of sleep talking.

When does sleep talking typically occur?

Sleep talking can occur at any stage of sleep. During Non-REM stage 3, talking is difficult to understand and often sounds like gibberish. During REM sleep, talking may become more coherent.

Why Do People Talk in Their Sleep?: