Is there anything a good night’s sleep can’t do? Getting proper rest night after night can contribute to improved heart health, reduced stress, increased alertness, and improved memory, among many other wellness-related benefits. Given that satisfactory snoozing can be the blueprint for a sharper mind and a healthier body, we were curious about the link between rest and success and whether there was one to be found.

We surveyed over 1,000 Americans about their goals, aspirations, and sleep habits to learn if proper rest can help people cross their personal finish lines. Read on to see how sleepless nights affect productivity, procrastination, and the achievement of even the most ambitious goals and milestones. 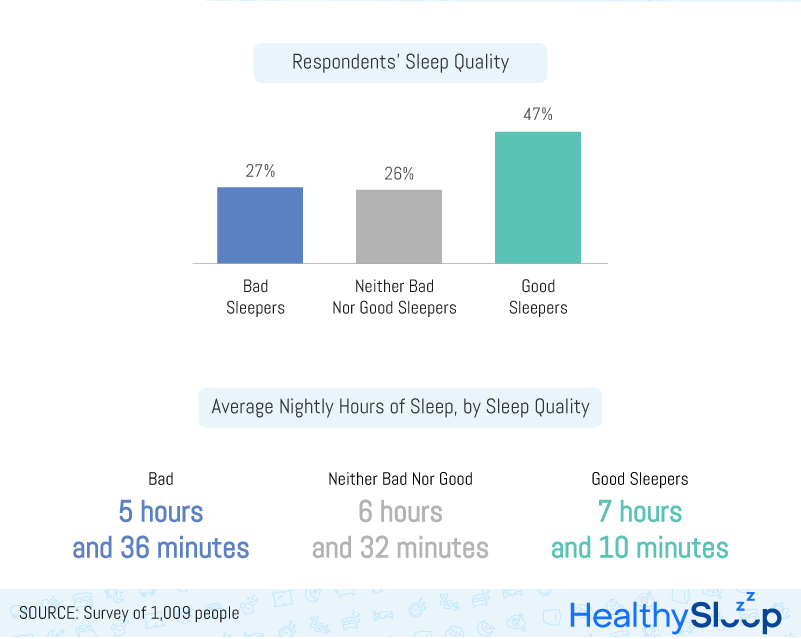 In the world of sleep, what separates the good from the bad? As it turns out, not a whole lot – an hour or two, at most, can make all the difference. For this survey, we considered “good sleepers” to be people who got an average of seven hours and 10 minutes of sleep every night, with bad sleepers clocking in at just over five and a half hours. Neither good nor bad sleepers got closer to six and a half hours of rest. As a general rule, adults aged 26 to 64 are supposed to get between seven to nine hours of sleep per night.

Luckily, for our respondents, the majority fell into the “good sleeper” category at 47%. Bad and neither good nor bad sleepers were just about even, accounting for 27% and 26% of the pack, respectively. 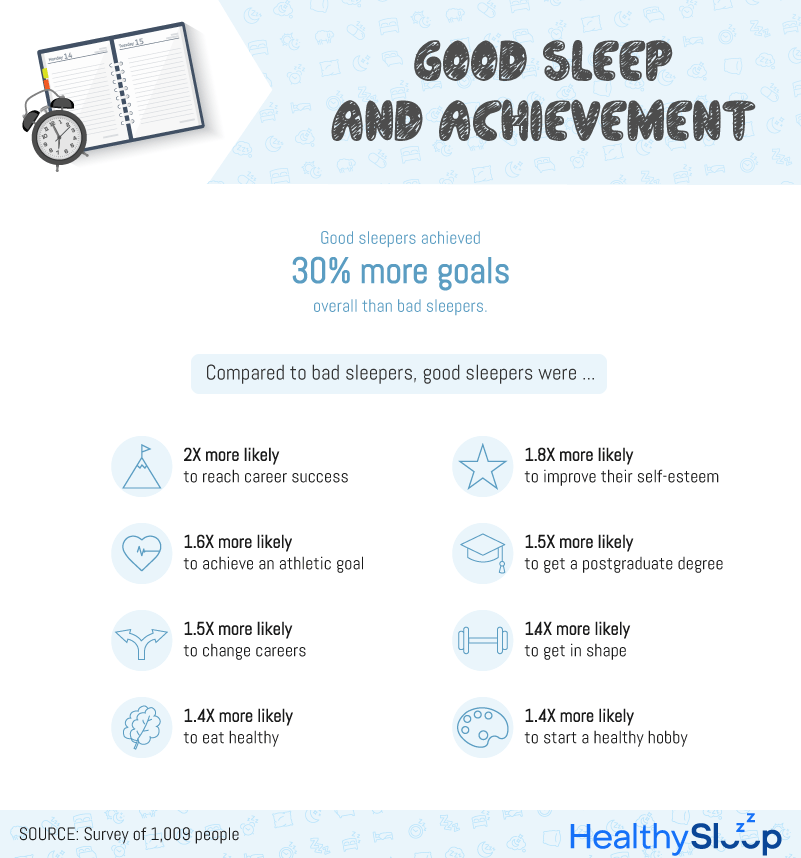 Whether short term or long term, goals drive us forward. In fact, goal setting is a great way to improve your focus and stay on track as you slowly begin to see progress.

Getting From A to B 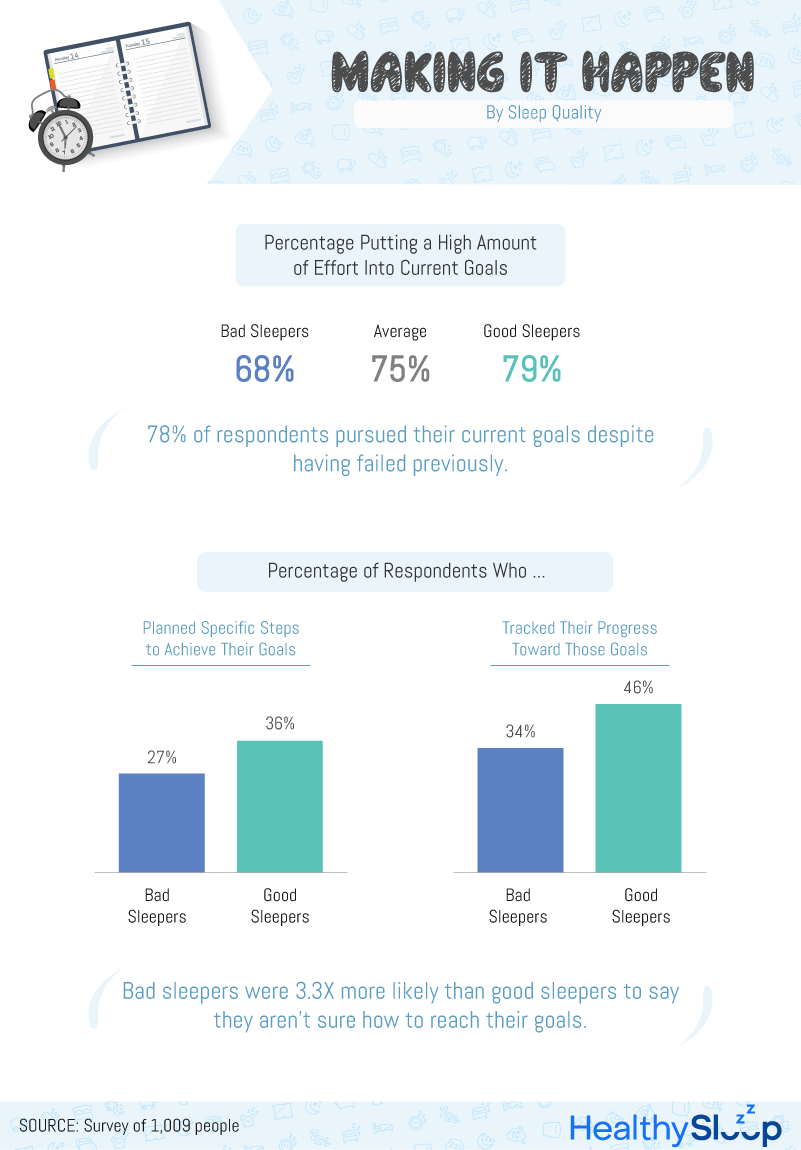 More sleep equals more energy, and that energy can easily be spent on achieving your most prized goals. Just under 80% of good sleepers said they put great effort into reaching their goals, compared to 68% of bad sleepers (this is among the 78% of respondents who currently pursued their ambitions, regardless of any past failures).

Reaching one’s goals requires sustained effort, unwavering commitment, and above all, organization. Good sleepers had the odds more firmly stacked in their favor compared to bad sleepers: Not only were they more likely to plan out specific steps as a pathway to achieving their goals (36% versus 27%), but also they were better at tracking their progress along the way (46% versus 34%).

Nose to the Grindstone

Dreaming big and setting goals for yourself is a great way to stay motivated and inspired in different areas of your life, but that doesn’t mean you should expect to achieve every single one. Setting reasonable, realistic goals is one way to position yourself for success and hit your target on as many as possible.

Getting a good night’s sleep certainly doesn’t hurt either: Good sleepers reported achieving an average of 68% of their potential goals, compared to bad sleepers’ 58%. At every echelon – 50% or more, 75% or more, and 90% or more – a higher percentage of good sleepers said they could reach the respective percentage of their goals.

Respondents who experienced worse sleep also experienced higher rates of procrastination. They were more likely to struggle with getting started on projects or plans, and once they did kick things off, it was more challenging for bad sleepers to complete their tasks. 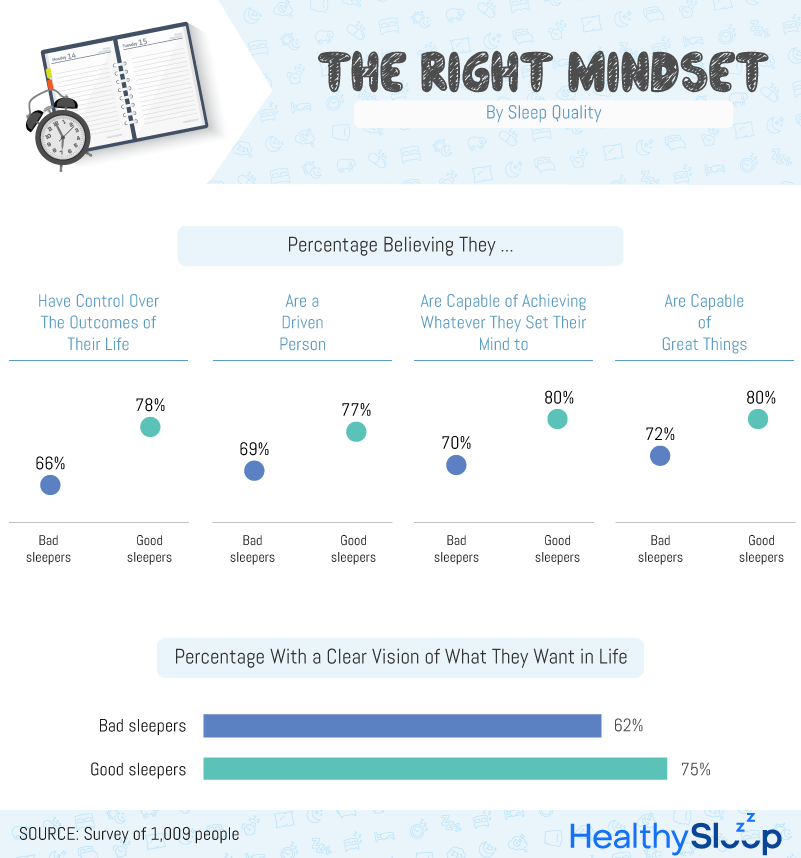 Achievement is largely a state of mind. Given that an increase in optimism and self-esteem have been tied to being well-rested, respondents who enjoyed proper sleep were much better equipped than their unrested counterparts. Good sleepers were more likely to believe they had control over life outcomes, could achieve their goals, were capable of great things, and were driven.

According to our survey, a good night’s rest also served as a gateway to having a better sense of balance and understanding. Three-quarters of good sleepers felt they had a clear vision of what they wanted out of life, compared to 62% of bad sleepers – a type of certainty that takes some people a lifetime to achieve, made simpler by high-quality snoozing. 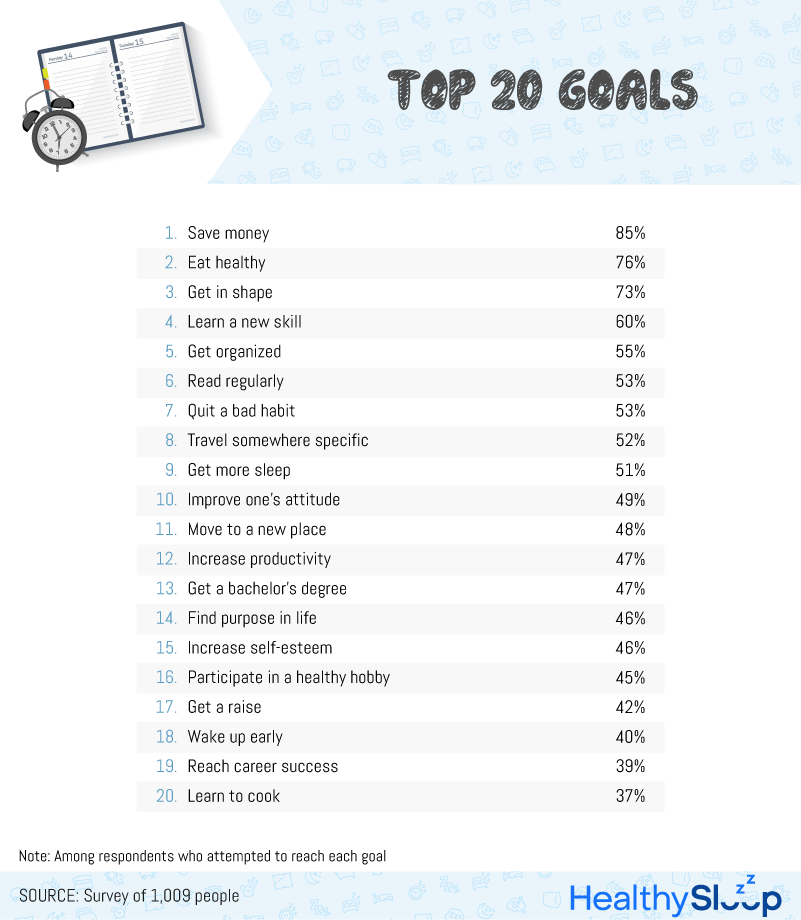 What does your list of goals look like? Do you have “big picture” aspirations, or are you working on more micro-level tasks? The most common goal for our respondents, to the tune of 85%, was to save money. Another 76% wanted to eat healthier, and 73% were looking to get in better shape.

Learning a new skill, getting organized, reading regularly, and overcoming a bad habit were also on the list for more than 50% of respondents, highlighting just how many aspirations most people juggle at any given time. 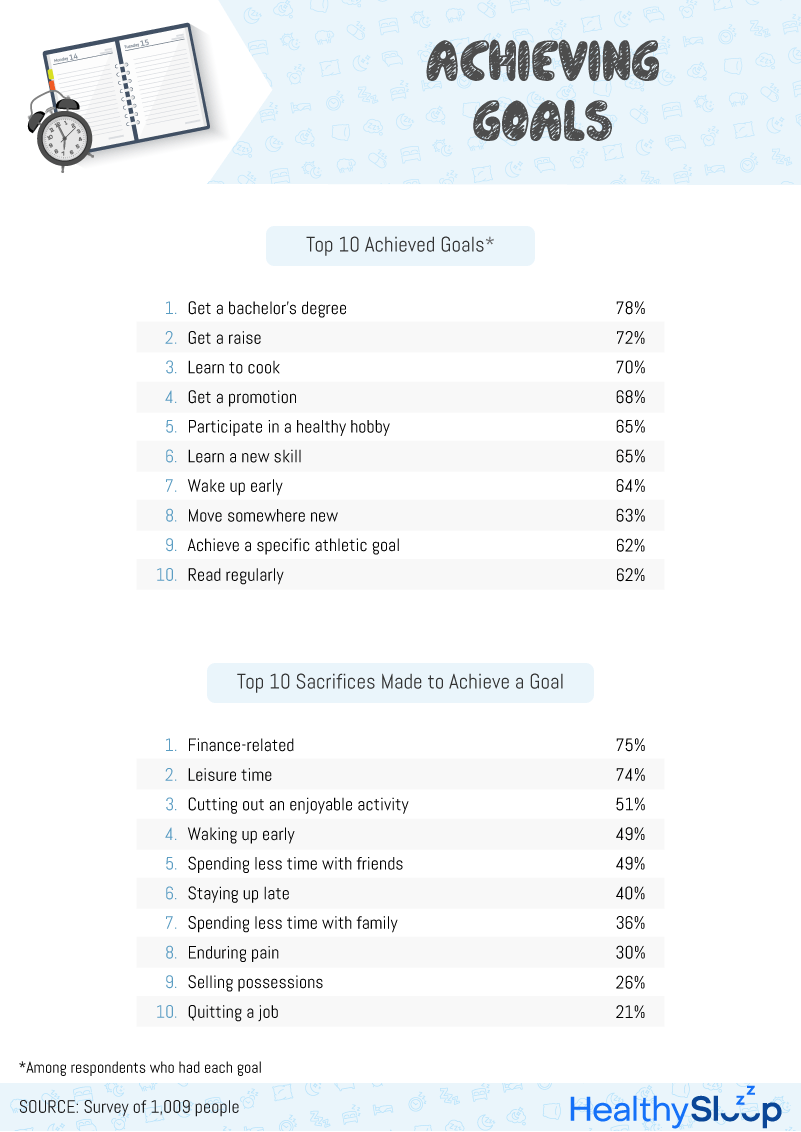 Some goals come easier than others. For example, you’re probably much more likely to reach a reasonable monthly savings goal than become a tech startup tycoon. Among our respondents, obtaining a bachelor’s degree was the most achievable aspiration of the bunch, with 78% of people achieving their goal. In fact, the pervasiveness of college degrees in the U.S. is at an all-time high: More than a third of Americans currently hold a four-year degree.

Respondents were also very likely to reach their goal of getting a raise, learning to cook, and getting a promotion at work. However, these milestones are rarely reached without making sacrifices in another corner of one’s life. For many, those sacrifices were financial (75%), and others gave up their leisure time (74%). Just over half cut out an activity they enjoyed, and 49% either woke up earlier than usual or spent less time with friends. 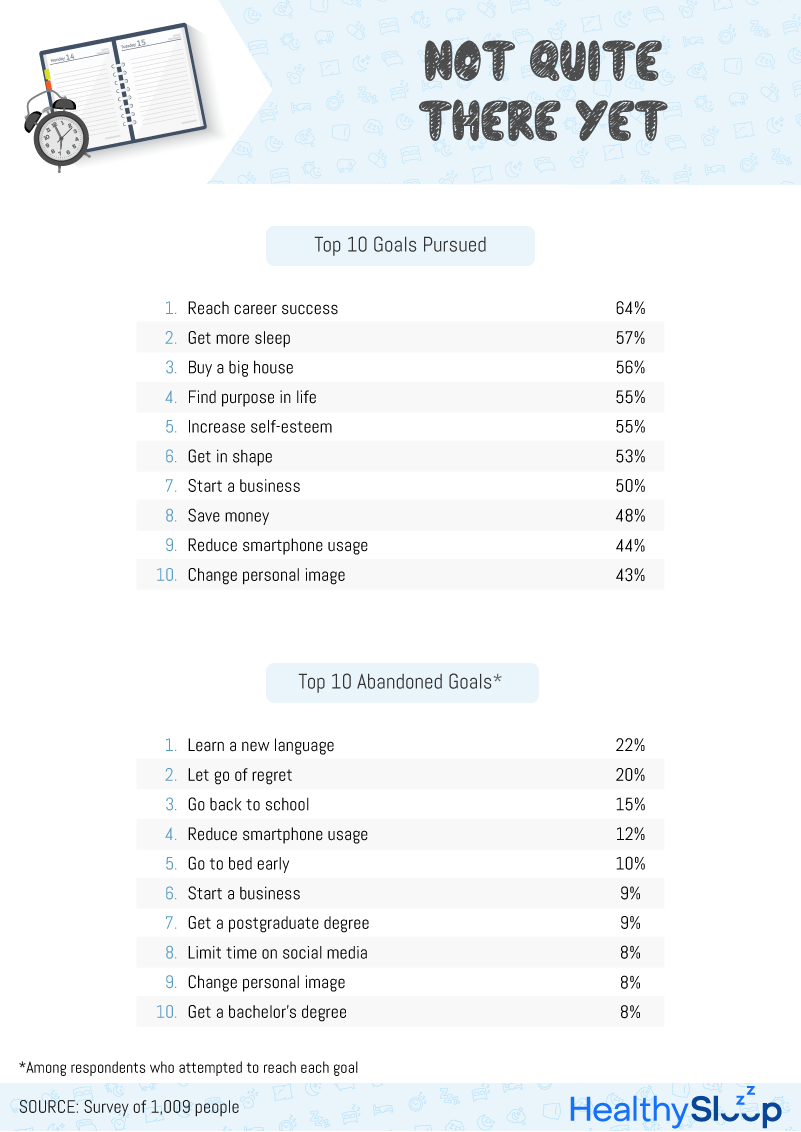 Some goals can be accomplished in a week, while other aspirations can unfold over a lifetime. There were a number of goals continually pursued by our respondents, including reaching career success (64%), getting more sleep (57%), buying a big house (56%), and arguably the most existential of them all, finding a purpose in life (55%).

Others were more likely to fall by the wayside, such as the 22% of respondents who put their goal of learning a new language to rest. One recent study found that at just 10 years old, the odds of reaching total fluency in a new language decrease sharply – to what the study calls “nearly impossible” – making this goal a difficult one for adults to reach. Our respondents also had trouble getting over past regrets (20%), going back to school (15%), and reducing the time they spent on their smartphone (12%).

It All Starts With a Proper Night’s Sleep

There were absolutely no exceptions: Respondents who fell into the “good sleeper” category were better equipped to succeed in every way. They achieved more goals, put more effort into where they wanted to be, were better organized in their goal-setting approach, procrastinated less, and were more likely to adopt a positive mindset regarding their own abilities and strengths.

Healthy Sleep is all about making sure you set the conditions for success from the comfort of your bedroom. Our detailed mattress reviews can guide you toward success as you create your ideal sleep setup, and you can discover just how important rest is by consulting our sleep resources section. When it comes to setting goals, your first one should be to get a good night’s sleep, so visit HealthySleep.org to get started.

For this study, we surveyed 1,009 people using Amazon’s Mechanical Turk platform. 591 respondents were female, 414 respondents were male, and four respondents did not identify as male or female. Our respondents ranged in age from 18 to 75 with an average age of approximately 37. To ensure that respondents took our study seriously, we used a carefully decoyed attention-check question hidden in the survey. Our margin of error was +-3% with a 95% confidence interval.

In many cases, questions and responses were rephrased for clarity or brevity. These data rely on self-reporting, and statistical testing has not been performed. The data are intended to be used for entertainment purposes only. Potential issues with self-reported data include but are not limited to the following: exaggeration, selective memory, and attribution errors on the part of respondents.

Our goal: For you to share this article for noncommercial purposes and always link back to the original piece. That way, everyone will always get the whole story, and credit will be given where credit is due. Thank you!

Sleep and Goals: Analyzing the Connection Between Slumber and Achievement: