Tossing and turning due to stress. Staying up late to watch your favorite TV show. Drinking caffeine late in the day. There are a thousand ways for us to be cheated out of a good night’s rest. Some are admittedly our fault, while others are completely out of our control. But no matter who’s to blame, the result is the same: Interrupted sleep leads to a dip in health and well-being.

Given that a good night’s sleep is a key factor in improving essential functions like concentration, productivity, digestion, and mood regulation, we wanted to get to the bottom of what’s keeping people up at night. The first step toward solving a problem is finding the root of cause! So we surveyed just over 1,200 people about their sleep habits, lifestyle, and before-bed challenges to get the answers. 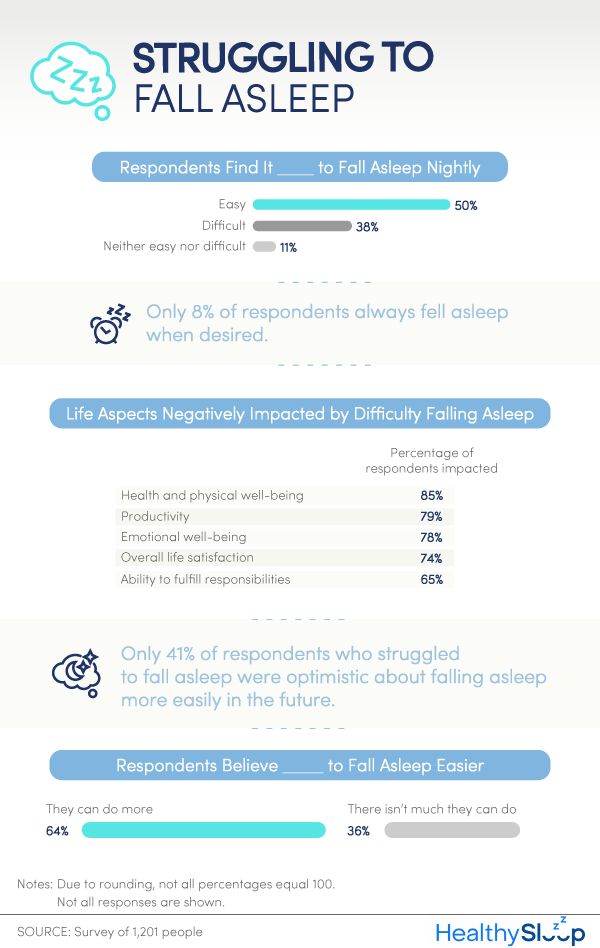 Exactly half of respondents reported they found it easy to fall asleep every night, while 38% said it was challenging – and for the latter group, their inability to catch some zzz’s led to some serious overarching issues. Eighty-five percent of restless respondents said their sleep issues impacted their health and physical well-being, 79% suffered a blow to their productivity, and 78% noticed a decrease in their emotional well-being. Nearly three-quarters said it impacted their overall life satisfaction.

Sleep is one of the most important pillars of health and wellness, and lack of it can result in major consequences to our well-being. Without adequate rest, we see impacts on our mood, memory, blood pressure, and immune system, among other things.

However, more than a third of adults in the U.S. aren’t getting enough sleep regularly. According to nearly two-thirds of our respondents, there was definitely more they could be doing to get the proper rest. In the following sections, we’ll explore the various reasons why people struggle to fall asleep.

Why We Lie Awake 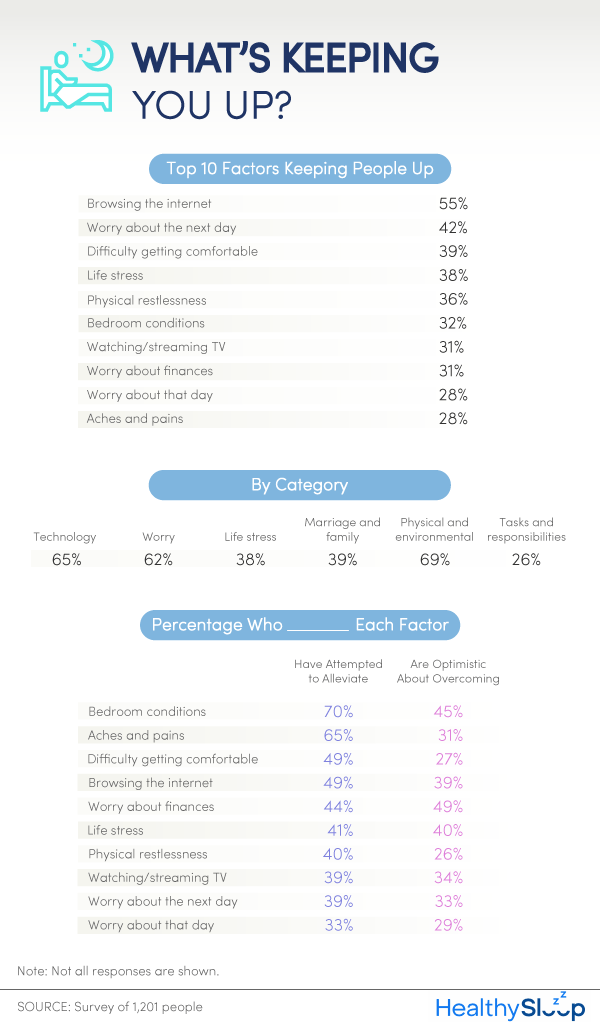 It’s official: We spend most of our waking hours staring at a screen. In 2014, people reported averaging nine and a half hours of screen time every day, compared to 11 hours in 2018 – so who knows where we’ll end up as the 2021s commence?

For over half of our respondents, screens didn’t just monopolize their waking hours – they extended them. Fifty-five percent said that browsing the internet kept them awake longer, followed by 42% who said worry about the following day prevented them from drifting off to sleep.

While some of these factors may be out of our control, we saw previously that nearly two-thirds of respondents felt they could do more to fall asleep better. Just under half said they had tried to curb their internet usage before bed, and 65% had attempted to treat disruptive aches and pains. The highest number of people (70%) said they tried to improve their bedroom conditions to promote better sleep, while fewer people addressed issues like worry, stress, and streaming TV before bed.

Browsing the web was the biggest sleep disruptor for more than half of both genders. Women had more trouble with their partner snoring or being restless, worrying about others, and using social media. On the other hand, men were more likely to stay up playing video games, spending time online, or watching TV. 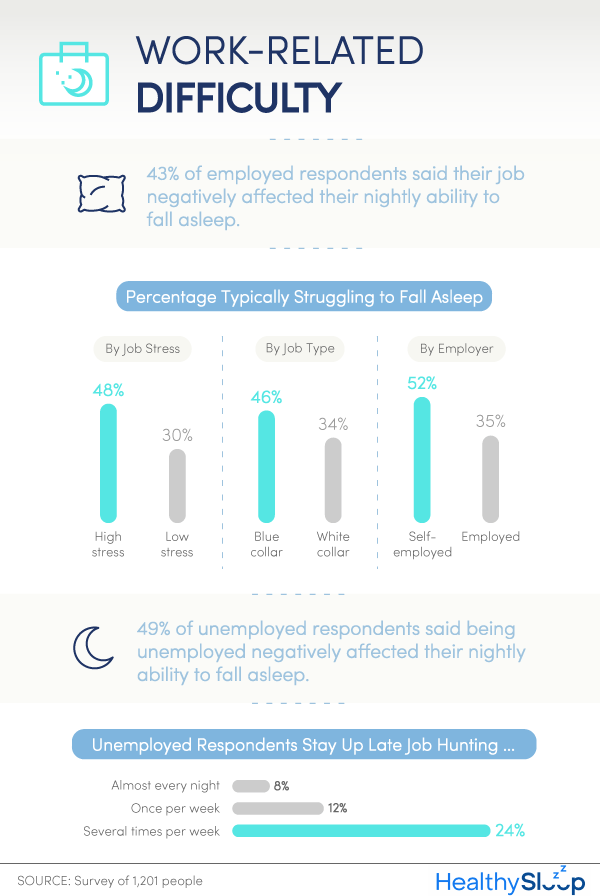 A lot of people view work-related stress as a simple fact of life – but its negative effects may run much deeper than we realize. Nearly half of all employed respondents said high job stress negatively affected their ability to fall asleep, with blue-collar workers and self-employed people reporting higher rates of restlessness than their white-collar and full-time counterparts.

While there is no silver bullet for coping with work-related stress, there are steps you can take to alleviate some of the pressure. Understanding the source of your stress, learning how to respond constructively instead of destructively, and taking the time to recharge are a few key ways to chip away at the monolith. Better rest will follow.

On the flip side, lacking a job can be just as stressful as having one. Nearly a quarter of unemployed respondents said they stayed up late job hunting several times per week, and just under half said their unemployment was a factor that kept them up at night.

Money on Our Minds 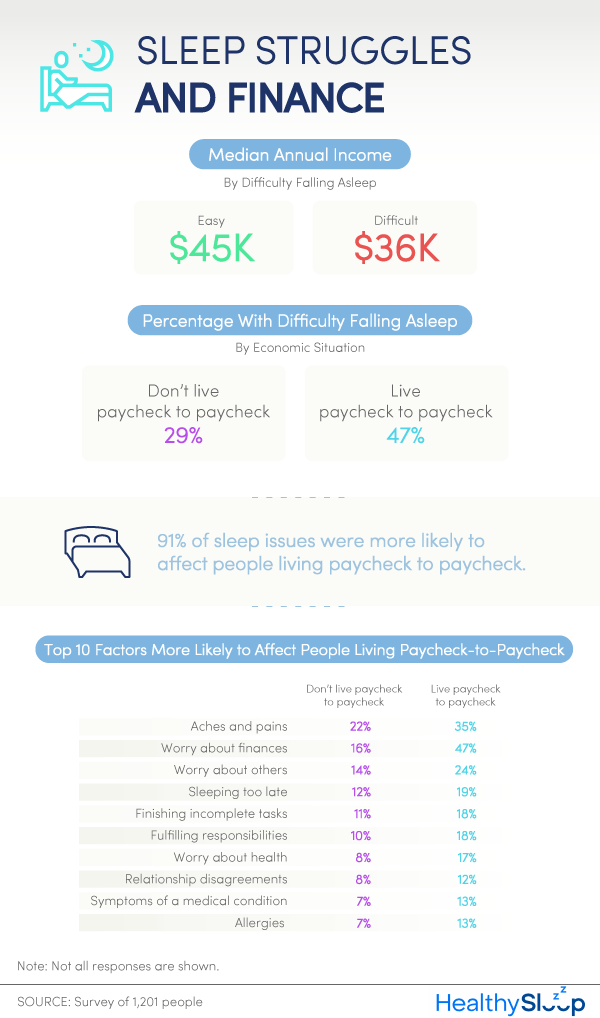 People who said they had an easy time falling asleep earned a median income of $9,000 more than those who found it difficult to drift off. In a similar vein, nearly half of people living paycheck to paycheck reported having sleep issues, compared to 29% of respondents who did not struggle with their finances to that degree.

When certain sleep-inhibiting factors came into play – like worry, allergies, and chronic pain – financially strapped respondents were more likely to lose sleep over any given one. For example, 24% of people in this group had trouble falling asleep due to worrying about loved ones, compared to 14% of people who were more financially stable.

If you’re among the 78% of American workers who live paycheck to paycheck, there may be sleep issues in your future (if you don’t have some already). The good news is, there’s hope: Starting an emergency fund before you desperately need the money and looking into a side hustle are two straightforward ways to begin improving your financial situation and building a more stable – and better-rested – future.

The Impact of Healthy Habits on Sleep 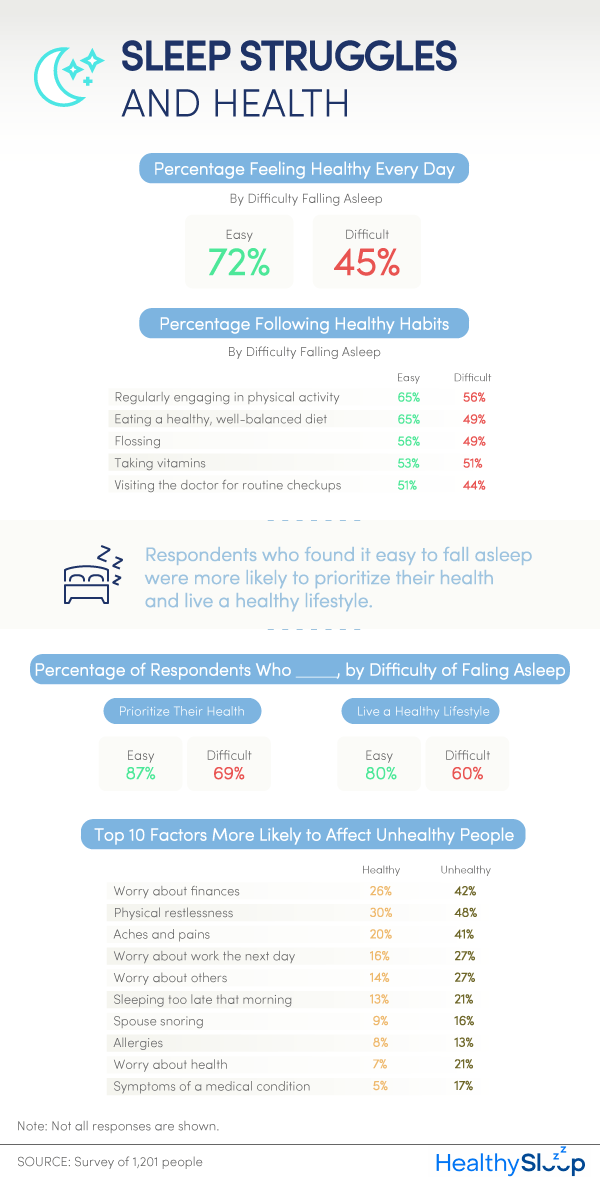 For our respondents, an overarching sense of health and well-being was strongly linked to a good night’s sleep: 72% of people who had no trouble drifting off said they felt healthy every day, compared to just 45% of those who found it difficult to fall asleep. On top of that, rested respondents were more likely to prioritize their overall health and live a healthy lifestyle.

The connection between restfulness and healthy habits was also strong among our respondents: Those who found it easy to fall asleep were more likely to eat a balanced diet, floss, and be physically active. Working out, in particular, has been linked to an increase in sleep quality and duration – as little as 10 minutes of aerobic exercise can make a difference!

People who fell into the “healthy” category were also less likely to be affected by physical ailments like aches and pains, worry (from financial issues to people they cared about), restlessness, sleeping in too late, and other detractors. At the root of it all: restful sleep.

Our survey revealed a significant link between sleeping well and overall health. Respondents running on an empty sleep tank experienced issues with their productivity, emotional well-being, and physical health, among other things. Instead of falling asleep at a reasonable hour, people found themselves distracted by the internet, stress about the following day, general discomfort and restlessness, and their favorite TV shows.

Respondents who experienced stress at work were also much more likely to have difficulty resting in the evenings, as were people living paycheck to paycheck. And while we can’t supplement your income or force you to turn off the TV before bed, Healthy Sleep can point you in the right direction when it’s time to choose the perfect mattress. Healthy Sleep features handy guides and quick tips to help you overcome a variety of sleep-related issues, as well as helpful mattress reviews so that you can make your selection with full confidence. Visit HealthySleep.org today (or tonight) to learn more.

We surveyed 1,201 people using Amazon’s Mechanical Turk platform. To ensure all respondents took our survey seriously, each respondent was required to identify and correctly answer an attention-check question. Our respondents ranged in age from 18 to 78 with an average age of 37. 573 respondents were male, 622 respondents were female, and six respondents did not identify as male or female.

In many cases, questions and responses have been rephrased for clarity or brevity. To help ensure statistical accuracy, outliers have been removed where appropriate. These data rely on self-reporting, and potential issues with self-reported data include but are not limited to exaggeration, selective memory, and attribution errors on the part of respondents.

Do you know what helps us sleep soundly at night? Knowing we’ve provided a link to the full article each time we share interesting information with our friends. You’re free to send this piece to anyone you think might enjoy it for noncommercial purposes – all we ask is that you provide a link to the original article so that people can get the full story. Thank you!

What’s Keeping Us Up?: